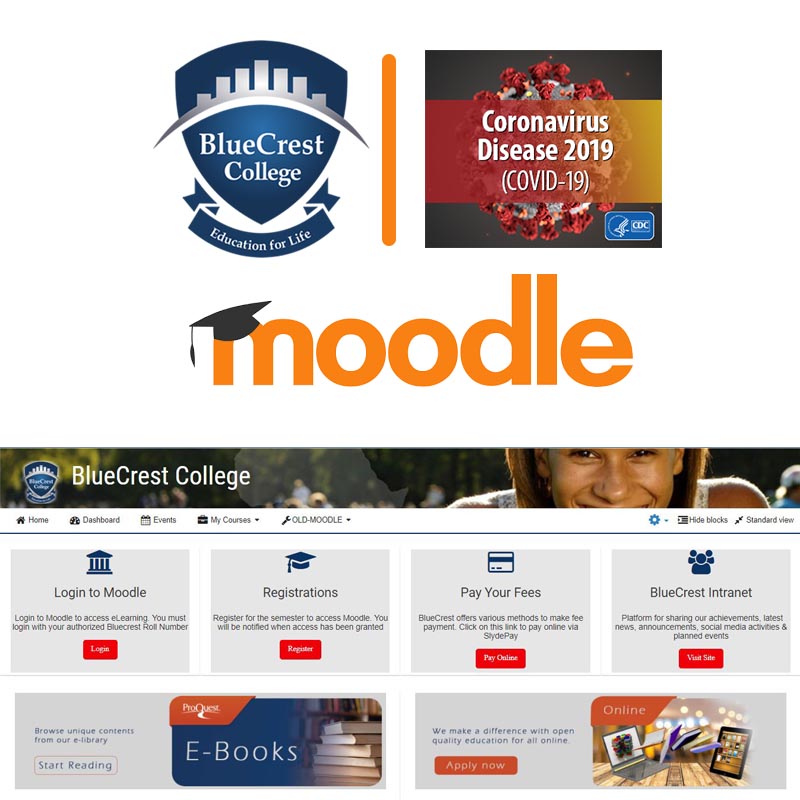 The Covid 19 pandemic took the world by surprise and BlueCrest College was not spared either. This however called for a closure of schools and a total lockdown which we all had to endure during the past few months. Following the urgent indefinite suspension of universities by the president of Ghana, there was a need for a seemingly faster adoption and familiarisation of our already existing LMS-Moodle which was barely 5 months old. The Moodle unit was now presented with the challenge of how to suppliment the needs of all faculty members and students. To manage the situation, the Moodle unit strategise these methods of engagements with all users of the Moodle.

We made Video tutorials of frequently asked questions from faculty members as most of them were still finding their feets regarding the Moodle usage.

We also developed PDF guides for both faculty and students on how to use the Moodle. The Moodle department had prevously organised series of workshops for faculty and students on campuse. We also were attending to all faculty members one-on-one, doing our possible best they learn to use the new LMS – Moodle. During all these times of engagement with the faculty members we thought we had prepared them enough to use all the features of the Moodle, it was later revealed to us when we shifted lectures fully online that, most of the faculty members were partly equipped to fully utilise the amazingly useful tools in our moodle. This called for a 24/7 availability of the Moodle unit to fully support all faculty members and students. We had already integrated our Moodle with a Live Chat and so, we had to always be online to attend to the unending assistance requests from all users of the Moodle. We in addition had to assist on phone calls, whatsapp and video calls. We also were assisting with ZOOM video meetings and google meet. I must mention that, the phone calls were unending, not spaced, there were a series of them like they had been planned to follow a series.

At odd hours, there was a need to connect to the computers of some faculty members remotely with a tool called “Any Desk” to assist them because they couldnt follow the tutorials and the video calls were not enough.

The total 100% shift online during the covid 19 really challenged us to always to online and available at any time during the day to assist as we may not know when a faculty or a student would be in need of assistance.

One of the major challenges we had to overcome was the huge traffic on our Moodle LMS. The Moodle server at a point really was not able to bare the traffic on the Moodle. During these times, the Moodle uptime was nothing to write home about and it made working on the Moodle quite difficult and boring. The Moodle unit and our team in Dubai incharge of the Moodle server had to work 24hrs and take cursory look at the cause, troubleshoot and fix it. It took us at about 21 days to fully resolve this issue and to stabilise the moodle. These times were really tough as we had to handle lots of complaints from both faculty and students. After resolving the issue, this called for the need of restructuring the Moodle interface for faster loading so we recustomised the Moodle for faster response.

The Moodle Administrator received a request from our CTO, Mr. Vinay during the lockdown to assist our other BlueCrest campuses at Liberia and Seirra Leone shift lectures online with an LMS preferably Moodle. I implemented the Moodle for them in cordination with Mr. Vinay and Anees and assisted them through Video Tutorials, PDFs and Video calls so they could use the Moodle LMS. I am glad to say that, they are also particularly excited because they had found the Moodle useful and are currently using it fully.

From the Moodle unit, we say a big thank you to all faculty members and students for baring with us during these times of intense pressure on us.